“As an actress, I needed to make sure I was feeling a very specific sense of place and had an emotional grounding in the abstract things popping into his head.”

-Bryn Carter, LSTFI alumna on using the Method in SCRAPS

“I was fortunate to be in a really open, loving group 1C,” actress Bryn Carter says of her first year as a student at Tisch at Strasberg.  “We still use #1CLove when we interact on social media.”  Carter credits much of her time at Strasberg to her success in the professional world.  Most recently, Carter was featured as Sebastian in The Flea’s SCRAPS.  Playwright and Shonda Rhimes mentee Geraldine Inoa found her artistic voice in SCRAPS, which serves as the inaugural show of The Flea’s COLORBRAVE season.  SCRAPS deals with police brutality in the modern America and the ways in which people of color have inherited the traumas of centuries gone by.  Bryn Carter found her method training of the utmost importance in accessing Sebastian’s reality.

“How do I, a tall, adult woman play an eight-year-old boy?” Carter asks.  Bryn speaks of her intense desire for her portrayal of Sebastian not to fall into the world of caricature, as he is a young child grappling with his father being shot at the hands of a police officer.  Carter is first seen in the second act of the play, which is told through a dream state of Sebastian’s.  “Even though the act is a fever dream, what Sebastian sees is real,” she asserts.  “So as an actress, I needed to make sure I was feeling a very specific sense of place and had an emotional grounding in the abstract things popping into his head.”  In this dream state, Sebastian articulates his struggles of fatherlessness, growing up only with his mother, Aisha, to raise him.

During the run of the play itself, Carter was reminded about why pieces like SCRAPS are so necessary to the world at large.  “I met so many Sebastians and Aishas, people who had lost family members or neighbors or friends.”  This hit home for Carter, to be able to connect with a larger community through the soul she crafted which was simultaneously hers and Sebastian’s.  It was, in fact, Bryn’s method training that enabled her to go so deep into Sebastian’s state of mind.  “I unlocked a memory I forgot existed; it was the first time I fully understood the weight of death,” she says. 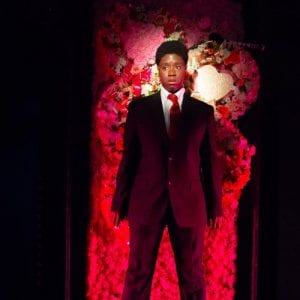 During her time at Strasberg, Carter found herself challenged and enlightened by the work that happens behind the red doors.  “I never really slipped into the mentor-mentee relationship with ease, but Irma Sandrey was a true inspiration of mine.”  Carter remembers the elegant furs and heels Sandrey used to come to class in, but more than that, it was the way in which she approached the work with veracity and fearlessness.  “She ripped apart our inhibitions,” Carter recalls.  “She never skirted around the darker, more lascivious aspects of a character.”

Bryn Carter is currently blazing a bold path forward in her career.  Along the way, she’s discovered more about who she is and what kind of artist she wants to be.  “I sometimes felt I had to do certain things because people told me to or because it seemed like the right way to pursue my dreams. I don’t believe that anymore,” she proclaims.  “Figure out what you want your career to look like and pursue that.”  It’s Carter’s fearlessness, much like Irma Sandrey’s, which enables her to be a bold, new voice in the arts – a voice that is more needed now than ever.

More info on Bryn Carter can be found at bryncarter.com.  She can be seen in Escape at Fringehub on October 26 & 27.  Follow Bryn Carter @bryncarter13 on Instagram.

Alumni News is written by NYU Tisch at Strasberg alumnus Will Brockman.  If you are an alum and have a story you think should be featured, please email [email protected].